Wycliffe student Amelia Henley, has been awarded a place at Harvard – the world’s top university.

The 17-year-old will be one of just a handful of former Wycliffe students, in its 133 year history, who have gone on to study at this prestigious American university, when she takes up her place next August.

She has been awarded a substantial scholarship from Harvard. She also received interest from Princeton, Yale and Penn State universities.

Amelia, who plans to study mathematics and chemistry, said she chose Harvard because of its courses and its strong squash programme.

The teenager has been playing competitive squash since Year 7. She joined Wycliffe at Sixth Form as a squash scholar through the College’s Squash Academy programme.

Amelia says she could never have won the place without the support of Wycliffe and its unique SAT preparation programme which helps students gain entry to US universities.

Head of Wycliffe College, Mr Nick Gregory said: “There has been growing interest in UK students wanting to study at overseas universities in recent years.

“At Wycliffe we responded quickly and decisively to this by appointing a dedicated Overseas Universities Co-ordinator in 2013 and this has proved invaluable.

“The expertise we have in place in the shape of Mrs Laurence Goodwin (and her predecessor Mrs Betsy Wentzel) has not only played a key part in helping Amelia to secure such a fantastic opportunity at Harvard but also last year meant that all six of our students who applied to American universities got the places they wanted (including making sense of the potentially complicated SAT testing process).

“Next year we have a number of boys and girls applying to institutions in the USA, Canada and the Netherlands.

Amelia initially joined Wycliffe because of its outstanding squash programme."

“I would never have secured a place in Harvard without Wycliffe. University level squash is not at the same standard in the UK as it is in America nor is there the support. I want to be a professional squash player but I know that it is hard to make a career out of it which is why university is so important.” Concluded Amelia. 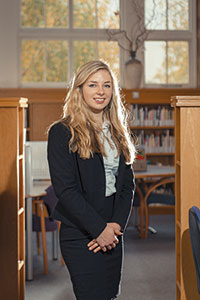